O.J. Simpson pal raises a question that I don’t recall being raised in court during Simpson’s 1995 murder trial, or even being battered around behind the scenes. The question is, “…what would Mark Fuhrman have to know before he placed the glove at Simpson’s (house).?’

My first thought when I read that in a Huffington Post article was if that question had occurred to Simpson prosecutor Marcia Clark or her assistant Christopher Darden either before, during or after the trial that ended in Simpson’s acquittal. If so, why didn’t that question make it into the trial? If not, why not?

Interesting Facebook post by photojournalist Haywood Galbreath, who was the only photographer to be inside the courtroom every day of the Simpson trial.

“It is tempting to assume he (U.S. District Judge Richard Berman) is a Patriots fan,” Alan Fredregill of Sioux City wrote in his Sept. 13, 2015, letter to the Des Moines (Iowa) Register, in which he asserted that the “Deflategate” was blinded by the celebrity of Tom Brady. “It also looks like he, just like Judge Ito at O.J. Simpson’s murder trial, was star-struck by Brady’s celebrity status.”

If Mr. Fredregill has truly bought the media-created persona that O.J. Simpson judge, Lance Ito, was too dazzled by the celebrity of Simpson at his trial 20 years ago to be objective or preside appropriately over that trial, then Fredregill will understand why many consumers of today’s media believe that all Iowans are hayseed rubes who can’t find their way out of a cornfield.

Fredregill and all who have swallowed the media-spewed star-struck Ito image need to read Anatomy of a Trial: Public Loss, Lessons Learned from The People vs. O.J. Simpson available from Amazon in hard copy and as an ebook.

Conversation over ribs, yellow tail tuna and quiche on Monday focused little on the events of 18-19 years ago and a lot on what’s in the future. Looks bright for all! It was a great relief to be assured that Lance Ito does not plan to become a Texan. 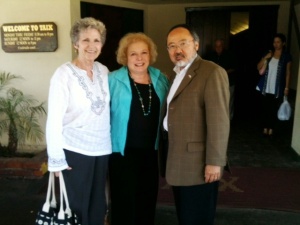 I haven’t lived in the Los Angeles area for more than a decade, so when Eric Garcetti stopped by our table to greet his acquaintance, Lance Ito, I was slow to recognize him as the newly elected mayor of Los Angeles and son of Gil Garcetti, who coincidently, or maybe ironically, was Los Angeles County District Attorney during the Simpson murder trial era.

Ito and Deutsch might have known who the man with the new mayor was, although they didn’t indicate that they did when Garcetti introduced him simply as Shaun Donovan. But I didn’t. I thought he might be on Garcetti’s staff when Linda, whom Ito introduced as being with the Associated Press, asked Garcetti a question. The impression I got when Donovan, eyeing Deutsch, touched the mayor’s arm and indicated that they should go, was that he felt wary about Garcetti answering, impromptu, a reporter’s question.

Although Donovan might have just been on a tight schedule, I might also have been right about the man’s caution. I was wrong, however, in thinking he might be a mayoral aid. He was the Shaun Donovan who is United States Secretary of Housing and Urban Development.